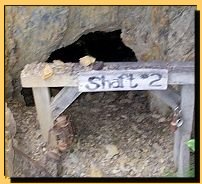 Reports of gold in the Turnagain Arm circulated in the early 1880's. Miners staked claims on the south side of Turnagain Arm in 1883 and 1884. Miners rushed to the area of the Arm. The supply towns of Hope and Sunrise soon developed. Prospectors visited creeks and their tributaries beginning in 1885. With the exception of Crow Creek, miners did not discover significant amounts of gold. A small village, Girdwood founded in 1896, supplied miners of Turnagain Arm's north side.

In June of 1905, a 20-acre quartz claim was staked on the north side of Turnagain Arm near Indian Creek. Subsequently, the claim was abandoned. Four years later Peter Strong discovered a lode deposit in the same area. The Indian Valley Mine and the Monarch Mine on upper Crow Creek were the only two lode gold mining ventures that were actively worked over a substantial period of time on the north side of Turnagain Arm.

On November 10, 1910, Peter Strong discovered a quartz deposit on the north side of Turnagain Arm opposite the mining community of Hope. Strong began digging an adit into the hillside, and in the following year he staked sixteen quartz claims in four groups at the site. During this time, Strong lived in a cabin he had built on the bank of Turnagain Arm.

During the summer of 1919, Strong's cabin on the beach and all of its contents burned in a fire. He built a new cabin of logs shortly thereafter, locating it further up the hillside and away from the government railroad that had been built along the edge of Turnagain Arm in 1916. Strong returned to lode mining at the site during the 1920's and 1930's. In May 1932, he staked a small agricultural homestead at the site. 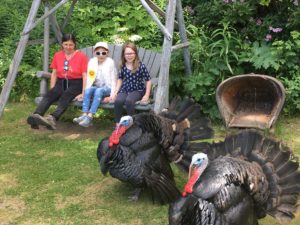